dreamland: thoughts on loving someone who hurts you 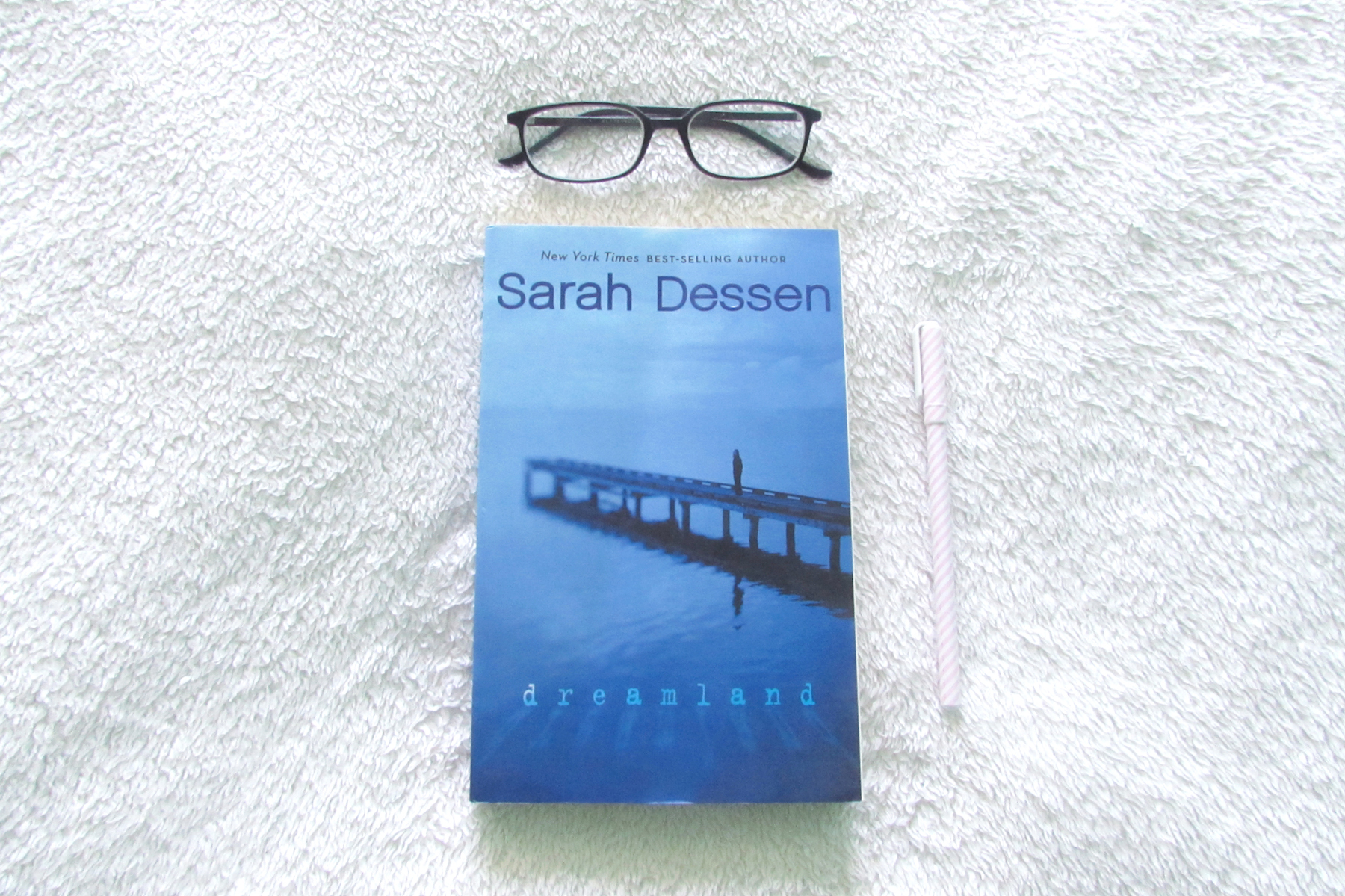 Ever since she started going out with Rogerson Biscoe, Caitlin seems to have fallen into a semiconscious dreamland where nothing is quite real. Rogerson is different from anyone Caitlin has ever known. He’s magnetic. He’s compelling. He’s dangerous. Being with him makes Caitlin forget about everything else–her missing sister, her withdrawn mother, her lackluster life. But what happens when being with Rogerson becomes a larger problem than being without him?

I finished my first book of 2015! I decided to begin my reading challenge with Dreamland by Sarah Dessen. Sarah Dessen’s books always get me in the mood to read, so I decided to start with her just to make it easier to get the ball rolling. Out of all of her books, I own all of them except one (That Summer, her first book). And out of all of them, I had three left to read. Seeing as I only had two of those three (Dreamland and The Moon and More), I decided to begin with Dreamland as it was the older of the two.

Going into it, I honestly had no idea what it was about. I remember back in high school when my friend and I would devour her books, we’d always skip over Dreamland because something about it felt depressing. Maybe it was the cover or that the book jacket summary seemed a bit ominous, but I remember my friend always saying “No, not that one. It seems depressing,” and that was enough for the both of us to dismiss it entirely. But after meeting Sarah Dessen at BookExpo 2013, one of my goals in life was to be the fan that I always thought I was. I was going to own all of her books and I was going to have read all of them as well. So, I went on a search of the two books that I needed left to own: That Summer and Dreamland. And that was how I got to own Dreamland and why it was there for me to choose from when it came to my reading challenge.

Spoilers after the jump.

Our juvenile hunches weren’t wrong though. Dreamland is depressing. It follow our main character Caitlin as she copes with the loss of her older sister Cass, who has runaway from the family and does not contact them. Caitlin is left in her older, “perfect” sister’s shadow to deal with the fallout her sister’s actions caused their family. But even though her sister is no longer there, Caitlin is still pretty much ignored by her parents, who are obsessing over the loss of Cass, which leads Caitlin to forge a path of her own and become a person so different from her sister that her parents and everyone else has to take notice. Enters Rogerson, the love interest and a boy so different from Caitlin, he becomes her motive of rebellion. He’s a wealthy boy genius, who deals drugs and has had a couple bouts with the law. He’s handsome and mysterious and with him, Caitlin feels like she can be anyone she wants to be. While Rogerson doesn’t tell her much about him or his life, Caitlin begins to see his portrait unfold the more she’s with him, until the one moment she’s caught having to hide in his room while his father reprimands him for being late by physically and verbally abusing him. What Caitlin is then left with is a Rogerson who’s so vulnerable that he needs her more than she’d ever know.

As the story goes on, you begin to like Rogerson just as much Caitlin begins to fall in love with him. He’s the boy with such potential, who acts out in every way possible because he’s physically, mentally and emotionally tormented at home. He’s a rebel with a cause; a druggie who needs weed and Caitlin as his medicine in order for him to feel better about the world. In turn, Caitlin finds herself needing Rogerson in just the same way. While her social and family life away from Rogerson seems to be heading in a downward spiral, her time with Rogerson is always constant. She’s with him 24/7. He picks her up from school, from cheerleading practice and games. He takes her out at night when he does his rounds and they comfort each other outside her house, in the privacy of his tinted BMW until her father flashes the lights to the house signaling that it was time to say goodbye. If I were Caitlin, I’d drive myself insane if I weret always with my boyfriend, but for her, she just finds herself drowning in him, so in love.

Of course this all changes when she doesn’t show up for a date because her best friend was having a crisis. Rogerson, who has a slight obsession with being punctual, apparently obsesses over where Caitlin could be, meeting up with her much later on after a school ceremony in which her whole family attends. While her mother wants to celebrate at home with her, she lets her have the night with Rogerson, who is seriously angry about what transpired earlier. He’s very subtle about the way he feels until he snaps and hits Caitlin while they’re driving away from the school in his car.

Now, I want to say that I saw this coming, but really, when I thought it, it was after I read the scene in which Rogerson’s dad beats him, and I said it jokingly to myself. For some reason within me, I completely brushed off the idea that Rogerson could ever be that person. Sarah Dessen does an excellent job of making him seem great, a tortured soul, who’s really smart and a bit of bad boy that everyone’s attracted to. And as a reader who completely let’s herself be immersed so totally within the main character’s life, what Caitlin feels about him is what I feel about him. She didn’t want him to be that Rogerson who hits her, who’s so full of anger and rage. She wanted him to be the Rogerson she fell in love with, the one who bought her milkshakes without her asking for them, the one who needed her to comfort him at night. And while I consciously knew that Rogerson was no good, an abused boy who’s stuck in the cycle and abuses his girlfriend, I didn’t want to believe it either. Like Caitlin, I was sort of stuck in this dreamland, where the realest parts of her life couldn’t possibly be real.

I was worn out, broken: He had taken almost everything. But he’d been all I’d had, all this time. And when the police led him away, I pulled out of the hands of all these loved ones, sobbing, screaming, everything hurting, to try and make him stay.

I wanted to bring this up because for years, every time I would watch those domestic violence specials on 20/20 or such shows, I would always tell my mother that if I were the women we were watching on TV, I would have left the guy after the first incident in which he psychically abused me. But after reading Dreamland, I’m not so sure it’s as easily or as black and white, as it seems. When it happened to Caitlin, I was egging her on in my mind to dump Rogerson and leave. But at the same time, I didn’t because being so immersed in her life, I believed her when she said that maybe it was a one-time thing and he’s really not like that at all. I wanted them to have a happily ever after just as much as Caitlin wanted it.

It’s so interesting what you do when you love someone so completely. I’ve always known that when you’re in love, you tend to see only the good things and brush away all of the bad stuff, but I hadn’t realized that it can get to a point of helpless delusion. It’s such a complicated mix of emotions that I can understand now how it can be so hard to overcome.

Not once did I think Caitlin was at fault though. In the end, she would do things in a very strict way as to not get on Rogerson’s bad side, because she thought that if she did this or that, it’ll be sufficient reason enough for him to be angry with her. And as much as she thought it was all her fault then, I never followed suit and thought that. Then again, I didn’t think it was Rogerson’s fault either even if I did think what he did was wrong. It’s just a sick cycle that they were stuck in and even though in the end, you don’t really know what happens to Rogerson, you hope he gets the help he needs, because like Caitlin, you’re still so in love with him, or the idea of him, the Rogerson from before, the one Caitlin–and you–fell in love with from the start.