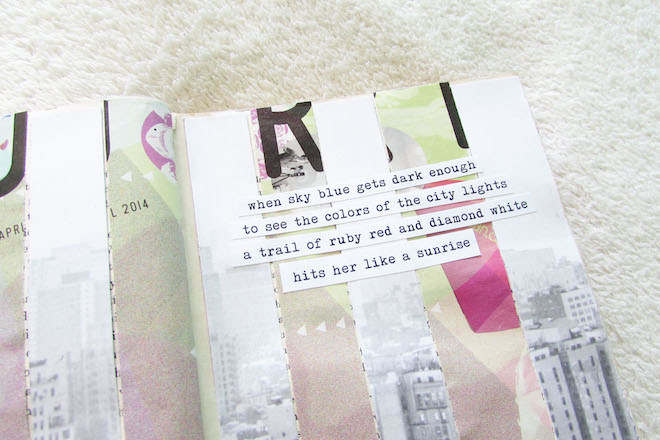 The start of my Southeast Asia 2015 trip is fast approaching and as I play the waiting game, I find myself being busier than expected. I have a lot of things that I should and/or have to complete before I leave and well, that doesn’t leave much time for anything else. Before I go on a huge trip, I sort of like to become a vegetable, like a couch potato, in front of my computer screen binge-watching a show on Netflix. It takes my mind off of my trip and just makes me more relaxed. I’m less nervous and worry less about my trip, which I always seem to do when the day of departure draws closer. But with a couple of projects to keep on top off, I can’t really manage the time to molt.

Anyway, it’s Get Messy Thursday and I’m a bit ashamed to say that I didn’t complete the number of spreads that I wanted to complete. I only managed two, which is definitely better than nothing, but still, I should’ve done two more. This weeks prompts didn’t really do much in terms of inspiration or ideas for me, and I wasn’t in much of a mood to art journal, since I was just coming off being sick the previous week. So let’s just say I had an off week, but I did complete two spreads and I rather like them both.

The first spread was slicing two images together and gluing them into my book in an alternative pattern. It creates a really cool effect that I really love. I used a black and white image of a cityscape and a more abstract image with lots of colors. When I placed all the pieces together, the completed image reminded me on the song “Neon” by John Mayer. So I typed up the first few lyrics of the song and added it to the page, because they seemed to fit so perfectly.

The second spread was about my favorite childhood book. In this case, my favorite book series, Harry Potter. I have this really lovely gold Lokta paper and the minute I looked at it I saw the Golden Snitch in it. So I decided to do that in the corner, after I gessoed the pages a bit, so that the book text wasn’t so sharp and prominent, but very muted and faded. Once I got the Snitch down, I added a bit of confetti flecks a penpal had sent me. Then I added the JK Rowling quote that I thought best expressed the series for me. I tried my hand at lettering again with black watercolor. Then I got a little crazy with the paint splatters–I love paint splatter, they’re so fun–along the page, just to give the spread a bit of movement.

I really love these two spreads. The first one is probably one of my favorites that I’ve done this season. I’m definitely going to try that technique again.

And finally, here a look at my entire art journal. 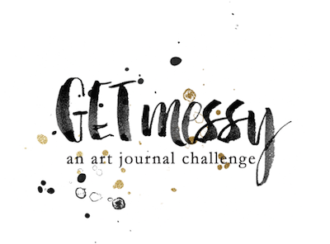