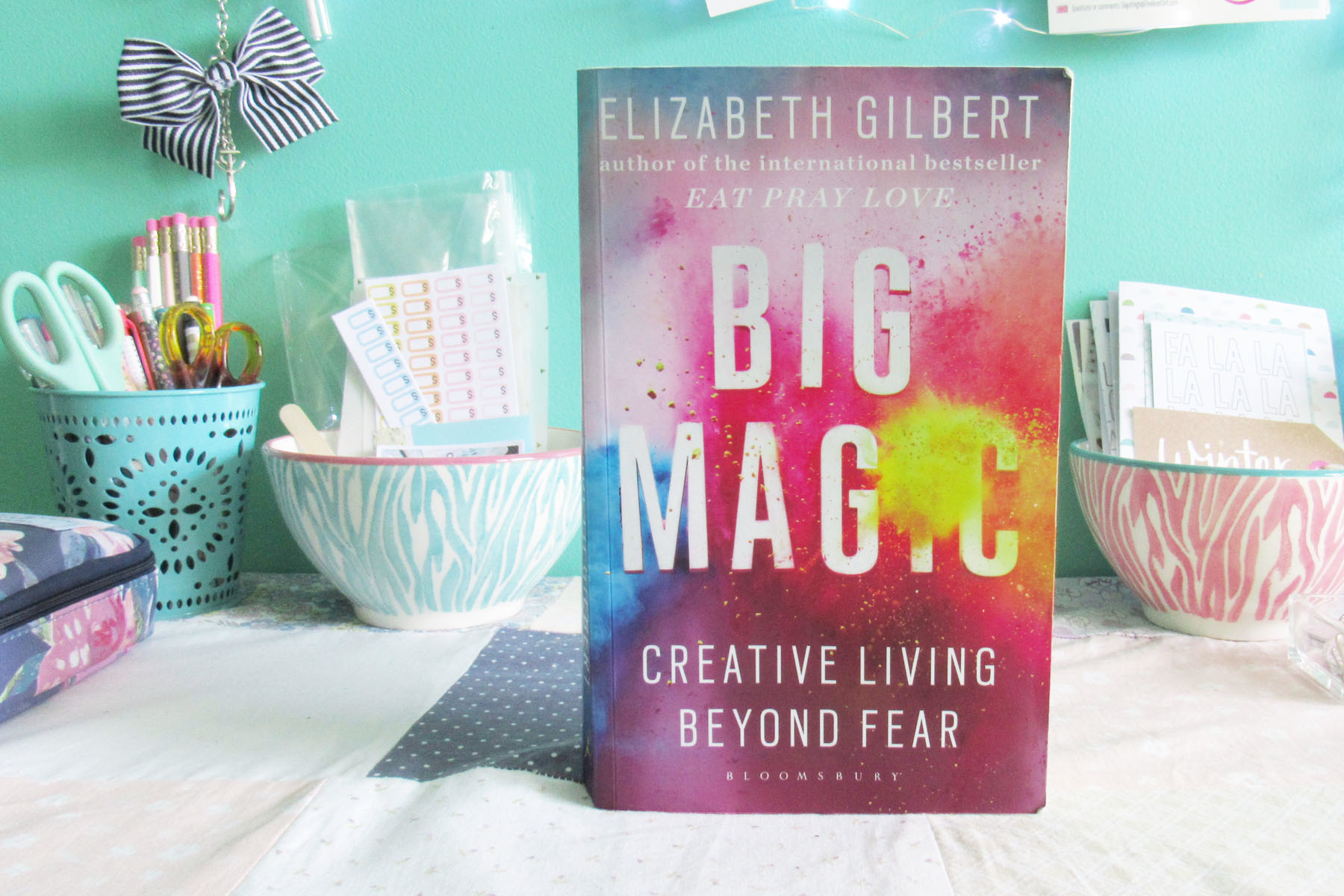 So today I want to talk about creative living. I just finished this book–this really pretty book that I has taken me a year to read (terribly long story that involved a lot of traveling the world with it at the bottom of my backpack). It’s Big Magic by Elizabeth Gilbert. And in it she talks about this thing called creative living. It’s essentially living a creative life, whether that be through art, music, film, dance, writing, etc. Now I’m a creative person, obviously from just looking at my blog, Instagram and Youtube channel, I like to make stuff. I like to craft, I like to art. I am also a writer and singer songwriter, so I write stories and music and such as well. I would say I live a very creative life. I will also say that you can live one too even if you don’t do any of those things.

Now I don’t think this book taught me anything I didn’t know already. Even before I actually finished it, I had made the intention for myself to create more. My word for 2016 was CREATE and my goal was to create something everyday. I didn’t have to complete a creative project each day, just working on something creative did the trick. I just wanted to spend more time producing more than I was consuming. Prior to this year-long commitment, I found myself consuming more than I was creating and it kind of made me a bit ill. I was distracting myself with entertainment in order to forget about all of the anxieties in my life and I realized–after a series of unfortunate events–that this habit of consuming wasn’t doing anything to help my well-being. I was anxious all of the time and the distractions would only last a few minutes or an hour before those anxieties came back.

So the beginning of 2016, when I returned home from a long trip to Asia, I got back into art journaling. I was working through Get Messy’s Season of Happy when I realized that doing art–creating something–really made a difference in how I was feeling. I felt less stressed and more calm. I forgot about my anxieties, but at the same time, I was able to shed some perspective on them because even though I was making art about happiness, what I was feeling, all of those worries, were peaking through and it only took a few people in the Get Messy community to point those things out to make me realize that creating this art was actually helping me cope with all of these emotions and negative things I was feeling. So I decided then and there that no matter what I was doing, I was going to take some time out of my day to creative something.

This daily practice of creating is what I like to think of as creative living. Even if it involves just painting a page blue, that’s me practicing creative living in my day. It could only taken five minutes, but in those five minutes, I’m able to calm myself, to gain perspective and to deal with my worries in a safe creative way, even if it was just letting all of my frustrations go out on the page in the form of blue paint. It could be just as easy as decorating a planner spread or creating a scrapbook layout. Whatever got me playing and creating on a page always manages to make me feel better. Even picking up my guitar to just strum random chords. I don’t have to produce something of worth. I just have to create a bit.

There are a couple of jewels I highlighted from Big Magic. The first one is “You do not need anybody’s permission to live a creative life.” You don’t. You just need your own permission. You don’t need anyone else’s approval ever.

The second is “Follow your own fascinations, obsessions, and compulsions. Trust them. Create whatever causes a revolution in your heart.” Do whatever makes you happy. If it’s drawing circles, then draw those circles! If it’s dancing to 90s hip hop, then dance! Trust in your creative passions. You’ll regret it otherwise.

And the last bit is “A creative life is an amplified life. It’s a bigger life, a happier life, an expanded life, and a hell of a lot more interesting life.” I serious believe in this bit. I’ve never felt better, calmer, less anxious in a while since I began my daily practice of creating. I enjoy what I make and often when I haven’t been creative that day, I feel like I didn’t accomplish anything, which is always untrue. I just didn’t create. Plus, you’re always interesting when you tell people you make stuff.

I don’t know what it is about society and being an artist, but it seems to me that a lot of people feel that living a creative life is unattainable; it’s unrealistic. That you can never create art for a living. And maybe that’s true; it is hard to make a living wage off your art, but that doesn’t mean you can’t create art for a living. I need to be creating something in order to live, just as much as I need money to live. Creating adds something different to my life than money does, but that doesn’t mean that I can’t live without it. I feel a terrible sadness when I think of those who believe it’s either or. They’re missing out on so much, because actively creating does bring so much to your life.

So, do you live a creative life?