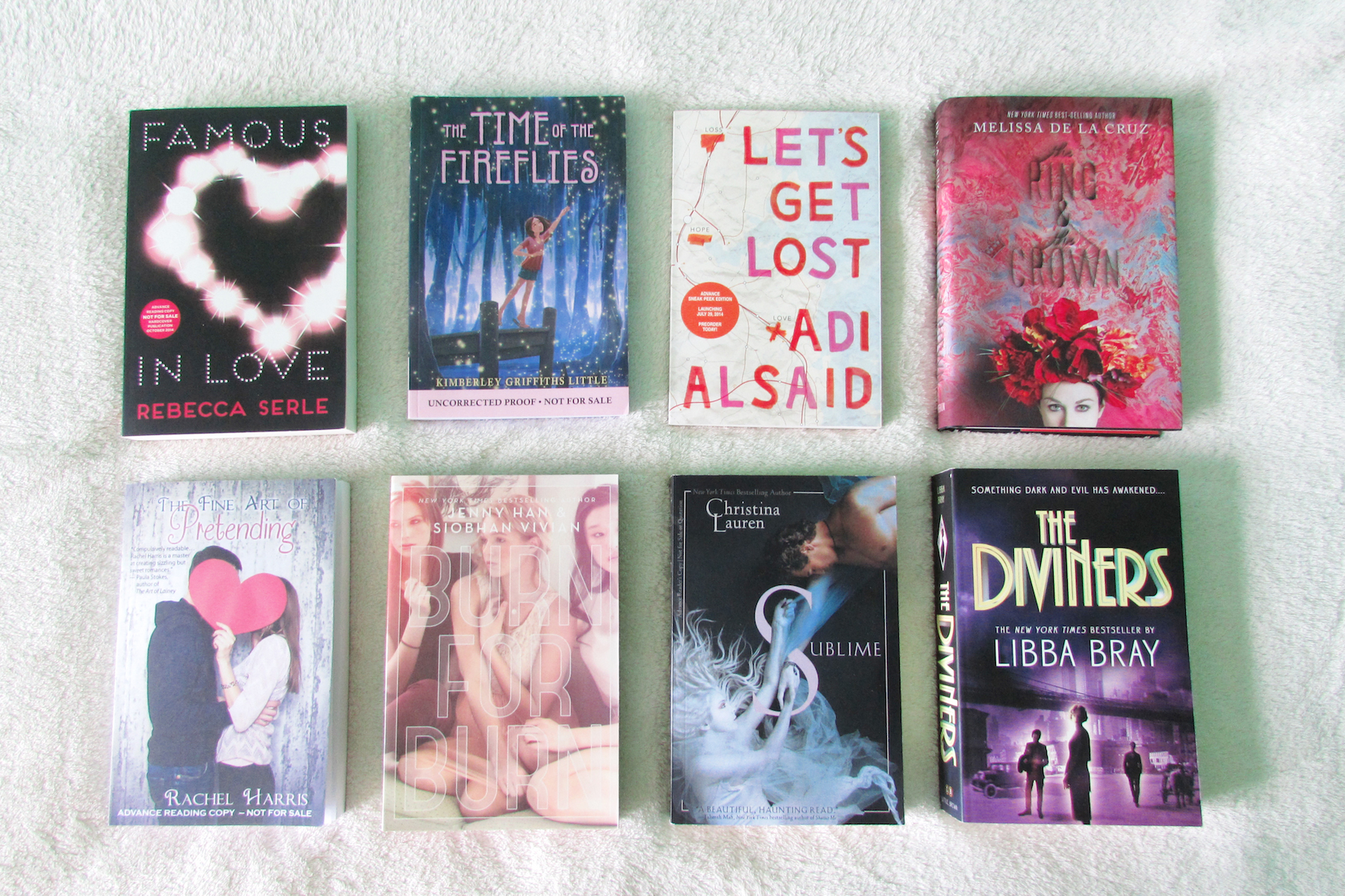 Yep, I did it again. Volunteered for ALL THREE DAYS of the Book Expo floor show. I worked Autographing again and wow was this experience a bit different from last year’s! For one, it was easier but also a bit difficult. Easy in the sense that I was familiar with everything: the volunteer rules, how the autographing system worked, the layout of BEA at the Javits Center, etc. For the most part, I knew what to expect and I felt really grounded this time around. The difficult part was the fact that we were horribly understaffed for the whole run of BEA. Thursday was bad, but not as bad as Friday. The morning of Saturday was worse than Friday, but on a whole, Saturday wasn’t too bad since there weren’t a lot of authors compared to Friday, we just had to deal with a lot more attendees because of BookCon (which I totally didn’t like, preferred Power Reader Day more, but that’s a completely different rant all together). A few of the volunteers this year volunteered last year, which was nice because we knew how to work well together. The others were new, but the ones I worked with were great!

For the most part, most of the writers that came to BEA this year were relatively new writers. There were a handful of returning writers and some really famous people, but besides the ticketed lines, there were very few really popular authors in the other lines. I pretty much worked the same lines all three days. Tables 8-12 were basically my area the whole time. Since we were a bit understaffed, we all worked the end of the lines dealing with the attendees and line control. We would only go up to the front at the beginning of an author’s session and at the end, which was really unfortunate as last year there was always someone up front to help the publicist with anything they needed. But with less of us volunteers on hand, it just meant that we had less time to talk to the authors we wanted to chat with and we got less time to hop onto lines and get books for ourselves. I think from the three days I manages to hop onto a total of four lines. The times I was schedule for a break, I took about ten minutes of it before heading back out to help the others. Not a lot of time at all to wait on any of the really long lines. And on Saturday there were no breaks to be had, because there was just too many people and not enough of us to handle them. 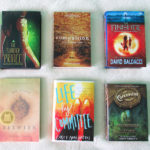 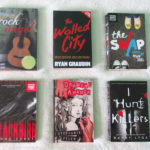 All in all, this year was great. I totally had a mini fangirl freakout when I saw Rick Riordan sitting in the Authors’ Green Room before he signed on Friday morning. Same that Friday afternoon when Stan Lee sat in the Green Room for like an hour or so talking to his people. Since the volunteer room is inside of the Green Room, we all kept having to walk by him and resist the urge to unprofessionally go up to him and interrupt his conversation, just so we could tell him how wonderful he is. It was hard, but we managed not to do that! I had a great time talking to some of the newer writers that I either worked the line for or hopped onto the line to get their book. They were all super nice and got really excited when I would tell them that I specifically circled their book on my list because I thought the synopsis sounded interesting. The highlight of the whole three days was on Saturday known as BookCon. Despite almost getting trampled by a HUGE crowded forming at Table 10 for Alexandra Bracken and at Table 12 for Libba Bray, I had a pretty good time amidst all the crazy. I was working the Bracken line and OMG was that the first time I felt really bad about yelling at all of the attendees to “Come back later!”

It’s super hard dealing with people, especially people who don’t really listen to your instructions. I generally don’t like confrontation and yelling to me just seems really confrontational, so I was really uncomfortable having to yell to people who didn’t want to listen to me, because they all wanted to be first on line so as not to miss out on getting a book. I get it. I’d want Alexandra Bracken’s book too (if I hadn’t already gotten the ARC of Never Fade at last year’s BEA). In the end, we didn’t get trampled and everyone who was in that big crowd complimented me that we were doing a great job and that I hadn’t been mean to them at all because I was doing my job. So that was nice. Shoot, a lot of the attendees were pretty cool. I ended up talking to a lot of them as we were strategically getting them on the Bracken line. And Alex was super nice and accommodating when it came time to sign all those books (her publisher sent over 200 copies of Never Fade), even when she went over her hour by thirty minutes. Even towards the end of her signing run, when everyone on the line had gotten through and there were still a few fans who just wanted to meet her, she was happy to have them meet her. Last year I was excited to meet Sarah Dessen, this year I was ecstatic to get to chat with Alexandra Bracken about how awesome her books are, Tumblr and how Ezra Miller would be an odd choice to play Clancy in the hypothetical movie adaption of The Darkest Minds. 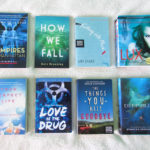 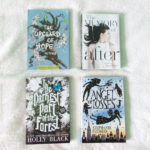 I got to chat with a lot of the other authors. Holly Black was absolutely lovely! She ended up giving me two signed copies of her book, one signed to me personally and another to give to some lucky person if I was unable to find this woman who really wanted a copy for her daughter but couldn’t make the line. I felt so bad that I couldn’t find the woman later on in the day, but I did end up giving it to someone else who wanted it. All in all, BEA this year was great. I ended up taking home 54 books–most of them being leftovers from the show that were stored in the back to be donated later–though 28 of them were books that I had highlighted as the ones I really wanted to get. That’s more than half!

So this summer, I’m making a promise to myself and setting a goal: I will read all 28 of those books I so luckily was able to acquire for myself. Last year, I only read about ten books I got from BEA, which is pathetic (granted, I read a lot of other books that I didn’t get at BEA, but still). That will not happen this year. I’m determined to read at least the majority of them this summer. I just need to stop watching TV all day and limit my computer use, because both are becoming really outrageous. I’ll start as soon as I can decide which book to start with. In the meantime, please admire the lovely color-coordinated photos of some of the books I got. Aren’t they lovely? 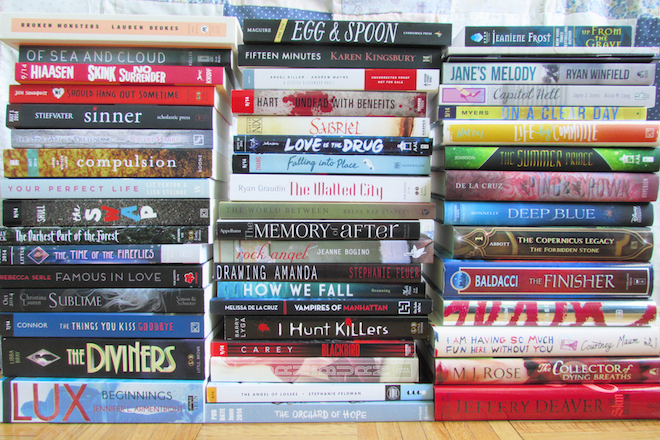 all of the book i got, except four that i forgot to add to the pile before i took the picture