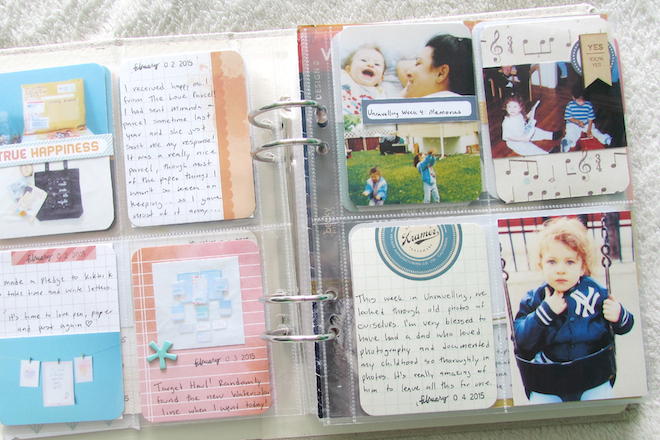 At the ending of last year, I had many intentions for my Project Life 2015 album. The major intention was to keep it going daily and keep up-to-date with it, so that I wasn’t trying to catch up with it weeks or even months later.

Oh how I am failing.

I haven’t touched my Project Life album since National Scrapbooking Day on May 2, when I decided to start it! So, a few days ago as I was perusing through all of my minibooks and planners, I spotted my Project Life 2015 album from the corner of my eye. I’ve been getting back into YouTube lately, and have begun to follow a lot more scrapbookers and planner nerds. There were two in particular that I watched their Project Life videos and I began to think, I should work on mine. It’s funny how a bit of inspiration from someone else’s work makes you want to work on your own project. These ladies’ Project Life albums were the 12×12 size and I just sat there and thought to myself, well if they can keep up with theirs, I can surely begin my little 6×8 album and keep with up for the rest of the year.

So since my summer has been pretty slow going all of a sudden (I’m down to one job instead of multiple and my boss has been away on vacation, so I haven’t had much work), I figure I’d work on my album. It’s really interesting how when you look at your empty album and the stack of photos you have next to it, it seems quite overwhelming to even begin. But once I push myself and start working on it, I sort of get into the flow of it and often times I can’t stop. I suppose that’s why they say the hardest bit of it is beginning.

So far I’ve gotten January and February done. To be quite honest, I haven’t been taking many photos this year, so there wasn’t much to document. I do have a nice stack of photos though for the following years, but once in the spread, it won’t look like much. I’ve also been keeping it quite simple. I’ve never been a master at embellishing my spreads, but I think these pages are especially under-embellished. They came out lovely nonetheless. I realized I especially love labels, which is unfortunate as I’m almost out of them. I’ll have to print some more!

on friends and growing up

geoscrapping: documenting your travels on the go online class