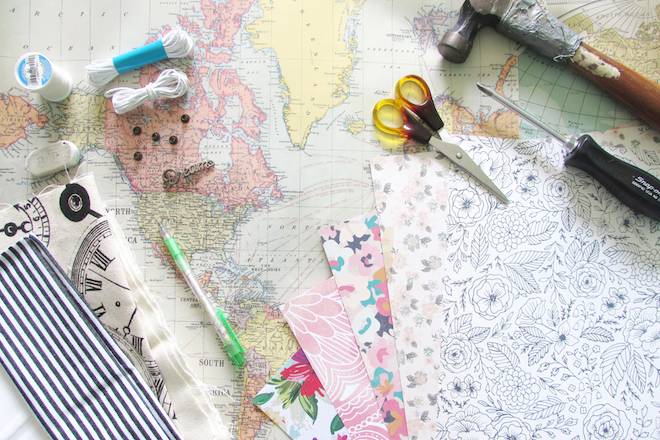 As 2015 is ending and a new year is approaching, I’ve been doing a lot of thinking lately of what creative projects I’m going to do in 2016. With the absence of Project Life for 2016, I have a lot more freedom to do more documenting in whatever format I want. I most particularly enjoy minibooks, so I was thinking of making 2016 the year of minibooks. What I came up with was to create a minibook or a creative art journal for each month. This came about from me wanting to do Kara Haupt’s Summer of Love again for 2016 as I had originally wanted to do it for 2015, but life got in the way. But that would obviously be for the summer, so I began to think up ways to stay creative the rest of the year and thought of doing a minibook or art journal a month. I figured I’d make it work and could get it done in conjunction with Get Messy, an art journal community and challenge that I recently joined.

Besides the individual minibooks and/or journals, I’m also still going to art journal regularly in my #artofjournaling notebook, as well as keep up with my personal creative planners. I sort of want to streamline my projects so that I’m not doing too much that feels overwhelming. Project Life became overwhelming and therefore not fun anymore. I want to try something new for this year and see if it works for me, in terms of documenting my life for the year. Project Life just wasn’t working anymore.

So with that in mind, I’ve broken down my minibook projects into months. Hopefully with this planning in mind, I can make 2016 a year full of creativity and minibooks!

Yet for next year, I want to designate two more. My A5 Kikki K is currently housing my journaling from Susannah Conway’s Unravelling class that I have yet to finish. I’m hoping that I continue to work on this course in the new year, so I’ll be keeping all my journaling from this course to this planner for now.

As for the second new planner, I want to use it as a memory planner. I like the idea of using a memory planner, or a planner to document and journal my days. Cory, The Reset Girl, does it with her Inkwell Planner and Heidi Swapp created a whole planner line for this very purpose. It’s like scrapbooking but in a planner. You journal your thoughts, add photos and bits from your day, or use it as an inspiration journal…whatever. I wanted to keep one for this year, but it seemed a bit redundant while doing Project Life as well. I didn’t want to repeat events in two separate places, so I see this as my replacement for Project Life.

I’m hoping to try Heidi Swapp’s new Memory Planner for the year and see how it goes. I might get a new A5 Kikki K to put it in as I don’t really like the binders they come in, but we’ll see. But I’m definitely going to use this planner system for the year. So in the end, I should have about four planners dedicated to something:

In sum, I will keep up with my personal and memory planners daily, my blog planner monthly and my Unravelling planner journal and my #artofjournaling journal whenever I feel like changing things up and journaling in them. Hopefully I create a minibook or art journal each month that at the end of the year I’ll have a nice library of books to reflect upon in the future!

END_OF_DOCUMENT_TOKEN_TO_BE_REPLACED

This site uses cookies in order to provide you with the best viewing experience. By continuing to use this website, you agree to their use.OkNoRead more